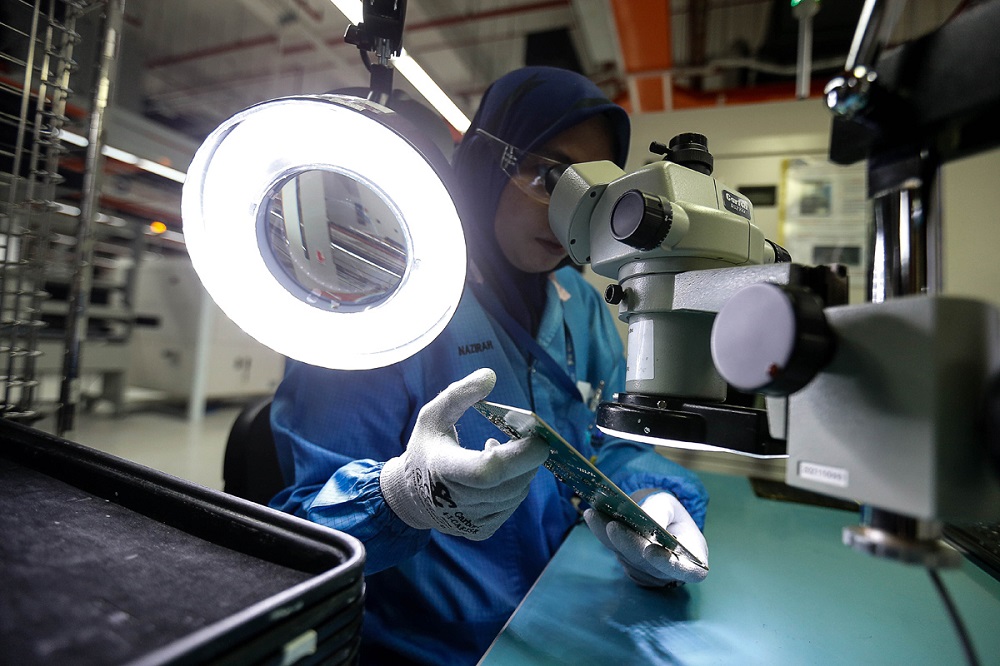 A worker is pictured at her station at a factory in Batu Maung. — File picture by Sayuti Zainudin

KUALA LUMPUR, Jan 27 ― Malaysia’s Producer Price Index (PPI) for local production increased by 10 per cent year-on-year (y-o-y) in December 2021 as opposed to a decrease of 2.1 per cent recorded in the corresponding month of the preceding year, mainly due to slower pace in primary commodities’ prices but inflationary pressures continued, said the Department of Statistics Malaysia.

In a statement today, chief statistician Datuk Seri Mohd Uzir Mahidin said the increase in December 2021 was attributed by the mining index that rose 45.1 per cent from a slump of 40 per cent recorded in December 2020, driven by higher prices for crude oil (46.8 per cent) and natural gas (37.0 per cent).

“Agriculture, forestry and fishing also increased at a moderate rate of 10.9 per cent compared to 23.5 per cent in December 2020, largely due to the incline in the indices of fishing (12.4 per cent), animal production (11.6 per cent) and growing of perennial crops (11.2 per cent),” he said.

He added that the manufacturing index increased 7.6 per cent in December 2021, contributed by the indices for subsectors of manufacture of refined petroleum products (22.3 per cent), manufacture of vegetable and animal oils and fats (18.1 per cent) and manufacture of basic chemicals, fertilisers and nitrogen compounds, plastics and synthetic rubber in primary forms (15.6 per cent).

He said the indices for the subsectors of manufacture of plastics products, manufacture of rubber products and manufacture of basic iron and steel also moved higher, while the utilities index recorded a marginal increase of 0.9 per cent and 0.7 per cent for water supply and electricity and gas supply indices respectively.

On a month-on-month comparison, Mohd Uzir said the PPI local production recorded a decline for the first time after a consistent increase for 14 consecutive months - dropped 0.6 per cent in December 2021, with the decline mainly contributed by mining index that registered a negative 4.2 per cent.

The index of agriculture, forestry and fishing also recorded a decline of 2.9 per cent, driven mainly by the price of oil palm fresh fruit bunches which fell 4.9 per cent from November 2021.

Chicken price also showed a 0.8 per cent decline, he said.

Meanwhile, the manufacturing index increased marginally 0.1 per cent, supported by a modest increase of 0.7 per cent for manufacture of refined petroleum products subsector besides rising prices for construction-related products.

However, the marginal increase in manufacturing index was also offset by a drop of 0.8 per cent for manufacture of electronic components and boards.

Similarly, the indices of water supply and electricity and gas supply rose 0.5 per cent and 0.1 per cent respectively, he said.

For 2021, Mohd Uzir said the PPI local production recorded the highest increase in a decade to 9.5 per cent.

It was the first time increase after registering a decline for three consecutive years, he said.

“In 2021, world economies experienced insufficient supply problems which cannot meet rebounding demand after movement restrictions in most countries were being lifted, which had caused disruptions to the supply chain and exert pressure on the prices of commodity and raw materials.

For 2022, he said the world is facing the threat of Omicron variant spread, which also made a significant impact on the prices of primary commodities especially crude oil. ― Bernama